Without a doubt there is now some separation in the Pac-10, but not completely. It's fairly clear Oregon is the class of the conference this year. Stanford is looking like a clear #2. After them there is a bundle of five teams who can all beat each other on any given day. Of those five one of them (SC) is not eligible for a bowl and another (Arizona State) must win out to make a bowl game.

Every week the picks seem to be clear. Take Oregon, take Stanford. Pick against Washington State (whose only remaining chance for a win is the Apple Cup, and only if Jake Locker is hurt). Other than that? Throw some darts.

Washington State has long been eliminated from bowl eligibility. ASU, with two of it's four wins coming against FCS schools, has to win seven to be bowl eligible instead of the normal six - probably not going to happen. UCLA has to win two of it's last three. Cal has to win just one, but has looked horrible since Kevin Riley's injury. Washington is one loss from being eliminated.

It's sad, really, in a conference this deep the Pac-10 may not have five bowl-eligible teams.

Oregon, Stanford, and Arizona are locks. Oregon State is likely. After that? Don't hold your breath. And that's why it will take a miracle for Stanford, even if they win out and finish 11-1, to earn a BCS berth.

On to this week's schedule. As always, all game times are Pacific time, followed by the network and the pick. Also, the network and whether or not it's on TV is for Portland - some games may be televised regionally, so if you live in a home market, check your local listings. Rankings are in parentheses (AP, USA Today). The BCS rankings will be ignored for now.

* USC is not eligible for the USA Today Coaches Poll because of NCAA sanctions.

In my mind these are just about all no-brainers. The only one that might be up for some debate is the SC-Zona game, but the Trojans are just way, way too undisciplined and inconsistent for me to pick them on the road in Tucson.

UCLA and Washington are off this week. They play in a Thursday night game next week, so this column will appear on Wednesday next week.

After last week only Oregon, Auburn, Boise State, and TCU remain undefeated. Oregon and Auburn control their national championship future. TCU now looks to be the team most likely to jump in if one of the top two loses - Boise State seems to lose voters and BCS respect every week.

Boise State plays at Idaho tonight at 6pm on ESPN2 - should be an easy win.

Auburn hosts Georgia at 12:30pm on CBS - they shouldn't have any problems.

TCU hosts San Diego State, a team getting some votes of late, at 1pm on Versus, but shouldn't have any problems either.

It's a safe bet there will be no change in the top four come Sunday.

It's been well-document in this space Misaki is a Beaver Believer. However, what about the other fuzzy kids? Well.

Take a close look at this picture. Click on it to make it larger, then click it again to maximize it in your browser. Look at Sera's left eye, the one to the right in the picture. Sure looks like an Oregon logo to me...and in green and yellow no less. 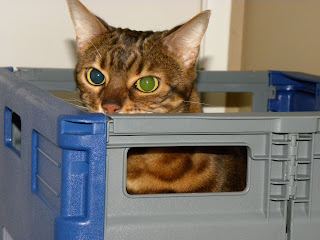 And check out Moochie - he seems to be sporting the "O" himself. Misaki does not look pleased about that. 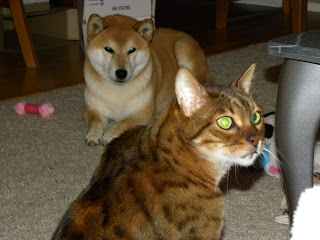 As for Misaki herself, she finds it pretty comical anyone would think she would choose anyone but the Beavers. Especially against Wazzu. 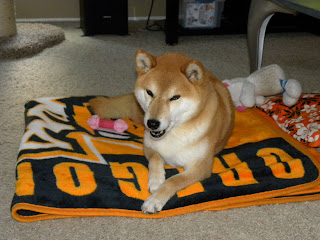