So I'm taking this writing class and one of the first lessons involves something called "free writing." The general idea is to just let your mind go, to not stop writing even if you don't have anything to say, to ignore grammar and structure, and just be creative. The thing is, I can't do that - I have to fix my spelling mistakes and form cohesive thoughts.

And that's a problem. Really. It sounds like it shouldn't be, but it kind of is. If I want to eventually write a novel I need to have the critical part of my brain allow the creative part to work some magic, without knowing what the result will be.

That's a big part of my - for the lack of a better term - block at the moment. I have ideas on pieces of this novel. I have a very vague idea of how the pieces will be intersected. However, the critical side wants more concrete pieces set down before it will allow the creative side to work. On the flip side, my creative side literally doesn't know the answers yet...so I'm at somewhat of an impasse.

I confess - I skipped the first completely open free writing exercise. I probably shouldn't, because that's where I need the help, but I've done this sort of thing before and the result has always been a useless mess. That's not discounting the exercise - that's just me feeling I could use a tiny bit of structure, just a little. Give me a topic to free write about, something with a modicum of specificity. Then I can make this work.

The second exercise did that. The topic was The Room Where You Write, and the assigment was to write two paragraphs about that, with notes to be honest, specific, and emotional. So I did, and here is the result - you tell me how I did.


The room where I write is on the upper floor of my home, up the stairs and down at the end of the hall. There is a cream-colored, aluminum baby gate on the entrance though we have no babies; instead, it’s to keep the distracting cats out and the dog in if that’s what we want. Inside the room are two doors, both painted the same bright white as the door form the hall and matching the trim. All of that was “natural” wood until a few years back when we decided the dull colors of our home needed some life. Then the natural went white and the white walls became a sage green, something much softer and welcoming. One door leads out to the attic, stocked with boxes of books, compact discs that have been turned into digital audio files, Christmas decorations, camping equipment we don’t use, and pretty much everything else we can’t find a better spot for. The other door leads to a closet where out-of-season jackets hang and my sports card collection waits for organization. There is one window in the room, sans covering, which lets in a fantastic amount of natural light during the day. Once the sun goes down this room is lit only by a single overhead light which isn’t nearly enough. Perhaps I should replace it with a brighter bulb, or go shopping for something else.


This room is not only where I write and surf the internet, where I organize pictures of our dog and cats, but also where my wife is currently studying for her own class, taking the steps to change her future much as I’d like to do. To that end we have two PCs sititng on a cheap, five-foot banquet table I bought 15 years ago at Office Depot before I went down to college at the University of Oregon. The “desk” is cluttered, filled with pieces of technology that don’t always get used. Two external hard drives, a networked hard drive we can both use to access digital images, the router from Verizon controlling out Internet and television access, an occasionally used heart rate monitor because my doctor thinks my blood pressure is too high (turns out, that’s only when I’m at a doctor’s office – go figure), an Oregon State coffee mug full of pens and a box knife because that makes sense, and cords going every which way to connect drives, mice, keyboards, monitors, and speakers curl around like kitten tails. Speakers, connected to my PC, also sit quietly with their sound turned off, so the only sounds in the room are the clicking of my keys and the soft whirring of the PCs. There is a greenish microsuede lounge chair in one corner of the room, one we spent a few hundred on at Dania that has been bequeathed to our queenly Shiba, Misaki, who lounges there some afternoons and evenings as we work. We placed a purple towel, quite garish in contrast, on the chair ostensibly to keep off the dog fur and protect the chair. Beside that chair is a rather modern glass and metal side table, much more modern than anything else in this room. I love the piece which is why we bought it, but where should it go? Another desk, a very old, handmade piece sits in one corner. It’s a light colored wood, built years ago by my wife’s grandfather, in what I call an antique style. Since I know nothing about woodworking, that’s the best I can do. There are drawers and rounded edges and it could use some finishing, plus it’s missing one leg. To hold it up we replaced that leg with an epic stack of World Book encyclopedias – who needs those when you have the internet? It’s quite the contrast to the side table, sitting just three feet away. A bookcase sits behind my seat, full of books one might think of as reference: travel books, dictionaries in various languages, coffee table books, and piles of magazines. The top of the bookcase has a couple manekineko figurines, lucky Japanese kitties, that I collect, with postcards from by brother-in-law’s trip to France and Spain and a picture of my wife and I from a tour of Safeco Field in Seattle. I couldn’t begin to say who took that picture a long time ago, but we are both smiling against the sun and it still turned out well. Next to the bookcase is a two-drawer metal file cabinet, also a flavor of green, but doesn’t really match the walls nor the chair in the opposite corner. An OSU Beavers mini helmet rests on top of that, my wife’s alma mater, with a stuffed Beaver.  Generally the walls of the room are bare, but there is a Sharper Image digital clock on one wall, with numbers big enough to read at the opposite end of the hallway. On another wall is a Chrisian Riese Lassen calendar we flip the months on because that’s what you do, not necessarily because we use it for anything specific. There is a corkboard, also, supposedly to keep track of things, but instead it has old schedules for the Seattle Mariners and Cincinnati Bengals, a couple of postcards from places someone else went, and a Message board with no messages. No one calls us.

Talk about writing a ton of words - that was 1000 of them. That's a ton for two paragraphs - yet, I probably could have written more. I didn't mention the dog toys on the floor and a few other things. For me, specifically planning two paragraphs on a subject means two distinct thoughts, yet as a I wrote I came up with multiple thoughts, and so the second paragraph ended up being quite the grammatical mess.

But it doesn't matter - that's the point. Just let it flow, let it take you places. I don't think there are spelling mistakes, as there should be, because I fix things as I go. They say you shouldn't for this kind of exercise, but it's just how I always type, be it an article, a column, an email, or anything else.

So did I fail free writing? Am I not "letting go" enough? Possibly. However, I think it's a start, which is further than I was yesterday. And hey, that's worth something.

And just for fun, Misaki in front of her claimed chair - and the mentioned side table - rubbing her face on the floor! (No, we have no idea why she does that.) 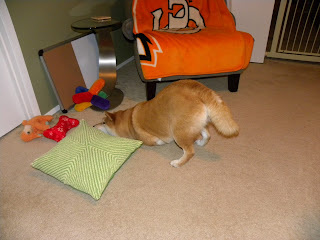 Anyone out there ever done a free writing, stream of conciousness assignment before? Did it work for you? Did you find that it had value?
Posted by Jason at 11/15/2010 07:00:00 AM

Email ThisBlogThis!Share to TwitterShare to FacebookShare to Pinterest
Labels: writing