I'll be real honest, I've never eaten a persimmon. I know what they are because I see them in the grocery store next to a sign that says "Persimmons - $2.99/lb!"

Image found at SkilletChronicles
But while I barely recognize them, apparently Misaki has quite the affection for them.

We don't have a persimmon tree, but someone in our neighborhood does and it seems that the local squirrels have taken to dragging these persimmons into the upper branches in our yard, digging out the seeds, and then tossing them to the ground. (This is where I should note these are not native to northern Oregon.) Misaki then, when she goes out to the backyard to do what dogs need to do outside, finds these half-chewed persimmons and proceeds to chow down on them with reckless abandon.

The first time it happened was a few weeks ago. I was outside with her and she suddenly stopped from zooming around the yard, focused on something in the bed of pine needles that layers half the backyard. I watched her as she sniffed, then gently nosed, then appeared to be chewing. I told her to leave it, thinking it was a dead animal or something.

Misaki, well-trained Shiba that she is, completely ignored me. Nom nom nom nom nom. Whose in charge anyhow? I should know better by now.

So I go over to her and she continues to completely ignore me. I had to reach down and grab whatever it was - I still hadn't gotten a good look at this point - out of her mouth. I mean, I didn't want her getting sick or anything, right? So I grab this thing and at first I thought it was a tomato. It being a few days after Halloween I thought some punk kids had thrown it into the backyard. Then I realized it was orange.

A persimmon? Really? Who throws persimmons into yards?

So I tossed the thing into the corner of the yard, and Misaki promptly bounded after it. Silly Dad, like that's going to fool her. I'm not a lab, she tells me.

Fine, so I picked it up and threw it away. I had no idea where it came from, but figured that would be the last of it.

Two days later she finds another half-eaten persimmon. And proceeds to almost finish it before I realize what she's doing. Since then we've tossed three or four of the things and still they keep showing up, all half eaten and in an area where squirrels likely dropped them from the trees.

I almost feel bad taking these things away from her, because she obviously loves them so much. I keep walking by them in the produce section at Whole Foods and think I should buy her one, just to see if she really likes to eat persimmons or it's simply the joy of finding something edible in the yard she loves.

Of course, this is the same dog we refer to as "our little goat" because at least once a day she asks to go outside and all she does is nibble on grass in the yard. Actually, check that - Misaki doesn't nibble. She grazes. At first we worried she would throw up after that since that's what Ruby always did, but apparently there is something missing in her diet grass covers. Or she just likes to eat grass. Either way, it apparently doesn't make her sick, so I guess I'm fine with it. 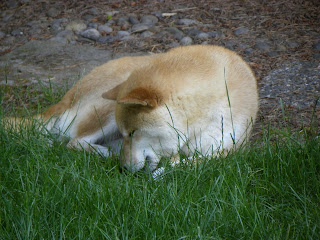 Misaki having a nice dinner salad. As you can see, there is plenty.
We joke she eats healthier than we do with the fruit and salad she finds in the yard. Hmm, maybe we shouldn't find that funny.

I still think it's crazy persimmons, a non-native fruit, keep showing up in my yard. It's even crazier my Shiba, who lived most of her life in Bend before moving to the Portland area this year, has decided persimmons are something yummy.

Then again, she was born in Japan - Kumamoto on the island of Kyushu - so maybe that's where she acquired a taste for them? Maybe these are a taste of her childhood and a long-dormant favorite flavor has been awakened in her palette, reminding her of her birth mother and blood brothers and sisters.

Crap, now I feel a little guilty. Time to go buy her a fresh persimmon. Anyone know how to choose one?