On the Fringe of Feast Portland

A month and a half ago Portland hosted a food and drink festival that could be described with no word other than "epic." Feast Portland, in its initial year, brought in thousands of tourists and plenty of all-star chefs from all over the world to contribute in all sorts of tasting events and special dinners.

Check out the schedule of the four-day event - simply amazing, and every single event droolworthy. Just Google Feast Portland (or better yet, Google Image Feast Portland) and you can get a sense of how truly amazing this event was.

Wifey and I, sadly, did not attend any of the events for a few reasons. The first is they were very expensive, as you can tell by the prices. Attendees got plenty of food for the price, though, but one problem is we cannot physically eat enough food to justify it simply for the sake of food. Considering we are still both trying to reach our weight loss goals (oh so close!), we decided to pass for 2012 and hope the event comes back in 2013 (good news - it will!). Next year it's on.

I should say we didn't attend any of the official events. There were plenty of events at restaurants around the city of the unofficial kind and we did manage to hit a few of those.

No Reservations with Anthony Bourdain is one of our favorite shows on TV. We love his snark and we love seeing all the amazing places he goes, people he meets, and food he samples. Not long before Feast Bourdain visited Austin, Texas, and there he met up with Aaron Franklin. Franklin owns, fitting enough, Franklin's BBQ, which has lines for hours every day just to get some brisket. His meat is smoked for hours and hours with no sauce and even Bourdain called it some of the best he's ever had.

Boke Bowl is a small shop, newer, down on Water Avenue in the central east side industrial area, near Water Avenue Coffee, clarklewis, Bunk Bar and Hair of the Dog Brewing. They got their start in popup events around the city (one of which we attended at Yakuza, then had their food at a fundraiser last summer) and they do ramen. Not traditional ramen, but a northwest version of it, with smoked meats, good noodles, and fantastic broths.

Somehow Franklin and Boke Bowl hooked up and one lone email from Boke said they would have brisket from Franklin for just one lunch run. If you get there after noon, they said, you'll probably be out of luck.

Since there isn't much of a chance I get to Austin anytime soon, I took a coworker and headed over there for lunch. Boke Bowl used the brisket for two dishes: as an add-on to their ramen and as a filling in a steam bun. So I got some of each, and after my order the woman at the register told me my order was the last one. I felt special, even before I ate it.

First to come out was the order of steam buns, which come three to an order. 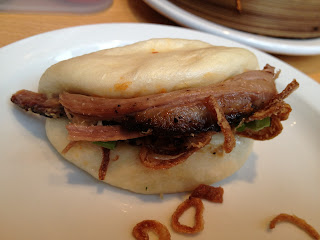 The meat was melt in your mouth good and extremely flavorful, especially when you consider there is nothing added to it other than a little salt and pepper. No special spices, no sauces, just a good crust on fantastic meat.

Next up came the ramen. I wasn't thinking and ordered the regular pork ramen, which comes with a chunk of meat already, but whatever. I added an egg, too. (I do believe, that yes, I blew past my protein goal on the day.) 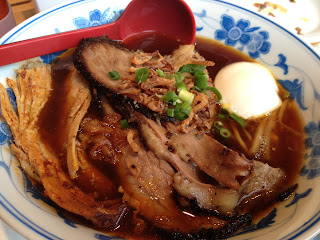 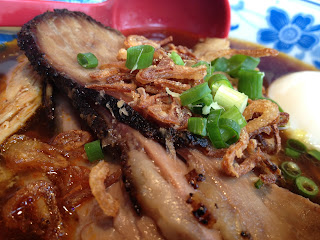 The verdict? Completely damn awesome brisket. I don't know if I'd be willing to stand in line two hours for it, but it was very good. A couple people who also had it noted that Portland's own Podnah's Pit is on the same level, something Franklin noted himself during his visit, so I think that just means we need to go back there.

Also, Boke Bowl is very good. The Korean pot roast and fried chicken steam buns are also very good and while it may sound odd, order Twinkie for dessert - it's tasty!

Feast Specials at The Country Cat

The Country Cat is one of our favorite places in the city despite being just about as far from home as you can get for us without hitting Gresham. We already had a dinner planned (see below) for the Sunday of Feast weekend, but when the Cat posted these Feast-inspired brunch specials we had to go. 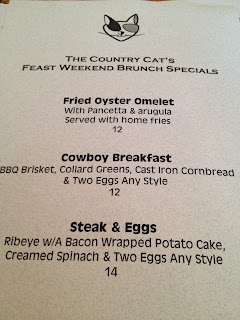 Guess which two we ordered? Yep, not the oysters. Wifey ordered the Cowboy Breakfast and I got the Steak & Eggs, which we, of course, shared. (Also, I have no idea why this is true but I love coffee there with a passion. It's just French pressed Stumptown, but it's really good. And if you have the stomach space the basket of cinnamon rolls are amazing.)

First up the steak and eggs. The steak was good, but it wasn't amazing. I actually thought the star of the dish was the bacon-wrapped potato cake. The brisket was excellent. Maybe not quite Podnah's or Franklin's, but well worth the order. Plus, I don't think anyone in the city makes better cornbread than the Cat. With a light sweetness it's moist but not cakey and complements meals very well. Both veggie elements were also good, though meager. (There was a time in my life not too long ago when that's how I preferred it, but not anymore. Give me some green stuff!) 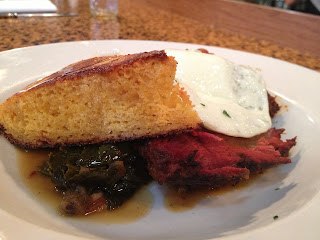 As usual a visit to the Cat was well worth it. Even though the rib eye wasn't the best, it's still one of the better steaks around, especially at practically a steal of a price.

Both of the previous events we went to on a whim, but this one we knew about a little in advance and made sure to get reservations: Eddie Huang presenting Baohaus at Ping. Baohaus is a steamed bun shop in NYC started by Huang after deciding the life of a lawyer wasn't what he wanted. He also can be seen on various food television shows and has written a book about his life, coming out next year. Huang has also been outspoken about chefs doing cuisines not from their native lands - notably Western chefs doing Asian food - but even he admits Ping (and PokPok - our visit thoughts here) owner Andy Ricker knows what he's doing. Since Huang likes PokPokNY in Brooklyn, I imagine that's how he ended up taking over Ricker's Ping for the evening. (For reference, here's notes on our visit to Ping earlier in the year.)

Our reservation was the first of the night, but seating was very slow. In fact, I think we were seated about 20 minutes late because the kitchen was behind and food didn't come for at least 20 minutes after that. here's the card placed on each  plate, Eddie on the front. 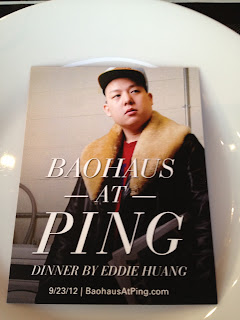 And the menu on the back (click the pic to enlarge). Each person received one each of the baos, a choice from two entrees, and the dessert. Three courses, $35. Since it was Wifey and I we naturally each ordered a different entree, so we could try everything. 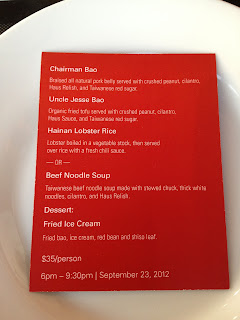 Lest you believe Huang is too big to work his own line, here is a pic of him trying to get everything going. This came after we were seated but before food started to come out. Needless to say, he didn't seem all that pleased at the delay, but then again it's hard to put blame on anyone when it's his food and his quality control being applied to a kitchen space that is not his and a staff working on dishes they don't usually make. 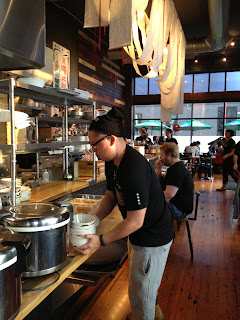 Here are the two baos, the Chairman with pork belly on the right and Uncle Jesse with fried tofu on the left. Both were very, very good. I really liked the crushed peanut aspect added to each of them. With the sauce and sugar I thought the Uncle Jesse even had a peanut butter and jelly kind of flavor, which will win me over every time. 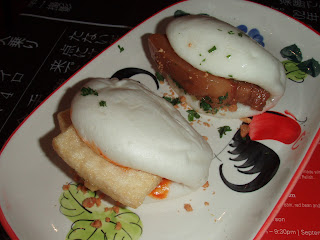 Here's my entree, the beef noodle soup. Loved the broth and the meat was almost melt in your mouth. It also had some nice heat to it. 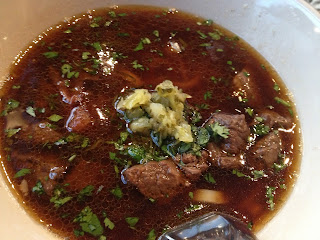 After mixing it up a bit you see the noodles. Again, very nice. 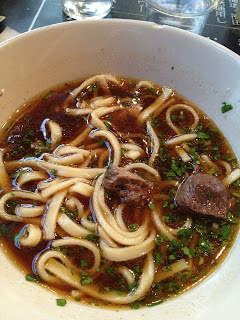 The Hainan lobster rice. I'm not normally someone who gets super excited about lobsters, but this was so well done I could have eaten two bowls of it. Really enjoyed it. 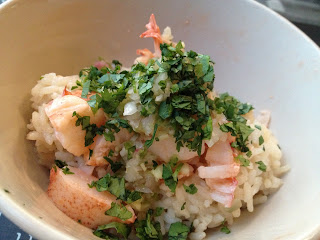 And the dessert, a fried bao with red bean, shiso (a minty leaf) and vanilla ice cream. It was...fine. A nice palate cleanser I suppose, but the shiso seemed out of place in the dish. I wouldn't order it. 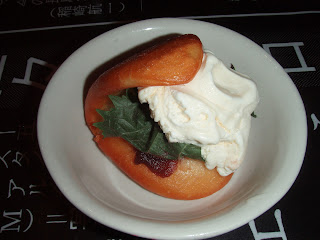 All in all, this was a fantastic meal despite the bumpy start to the service. Then again it was our only our second pop-up experience and the first where we got the first reservation of the night - maybe that's normal in these kinds of things?

I will admit, $35 for the meal was a little steep, but at the same time we got to eat food from an acclaimed NYC chef without having to buy a plane ticket. And we enjoyed it. If we ever make it to NYC to eat - someday we hope to - Baohaus will definitely be on the list, so in that respect the meal was a success for us and for Huang.

We didn't get to attend any of the Feast events directly, but these three made us feel like we were involved. That, to me, is a key point. While the Feast events were ridiculously expensive and ridiculously gluttonous - which may not stop us from attending one next year - these were much more moderately priced and gave us a chance to experience food we otherwise wouldn't get.