I was born in Portland, raised in Portland, lived my whole life in the Portland area (apart from my time at the University of Oregon), but I had never been to Mount Tabor Park until this past summer. Considering it dominates the landscape of the southeastern part of the city, that's quite an accomplishment.

Mount Tabor is not a mountain; it's a long dormant cinder cone, a relic of a volcanic eruption centuries ago, and named after a city in Israel. The park has hiking trails, tennis courts, basketball courts, picnic areas and fantastic vistas in all directions as one of Portland's highest points. When I was growing up it wasn't exactly known as very family friendly (probably why I had never been there), but these days - at least during daylight - families gather, lovers walk hand-in-hand and dogs are exercised by the dozens on the city's nicest days.

Also, the park is home to many of the reservoirs supplying drinking water to the City of Portland. 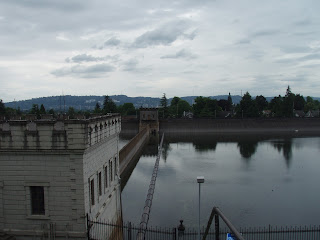 To me, it's a little odd. I mean, a person can literally walk right up to the reservoir (at the fence in the above picture), put their hand through the bars, and do whatever they want. Sure, the water is filtered and purified somewhere between these large pools and your faucet, but still. 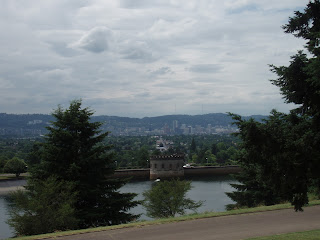 And, as you can clearly see, they are completely open to weather and wildlife. 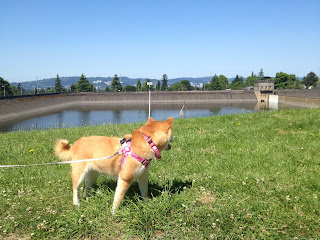 They do provide a nice backdrop for pictures. Even Misaki was impressed.

And yes, there are serious repercussions if anyone is caught messing with the pools. Presumably there is video surveillance as well. 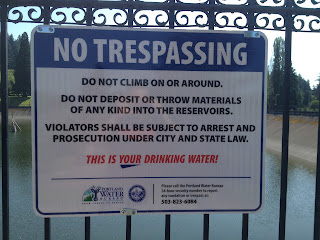 Personally, I think there could be a little more prevention in place. These fences could be further back from the edge of the water, for one. 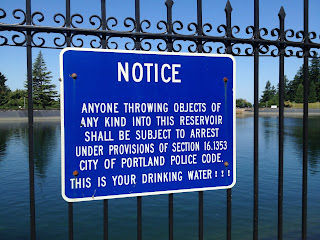 But hey, that's just me. The water at our house does not come from the City of Portland, but presumably it works out for them.

One of the reservoirs was empty because it was being cleaned and having some repairs done. These pictures do a poor job of really providing reference points for size - they are truly gigantic. Bigger in length and width than a football field, that iron fence is about eight feet high. You can also see the normal water line in this picture below, a few feet below the fence. 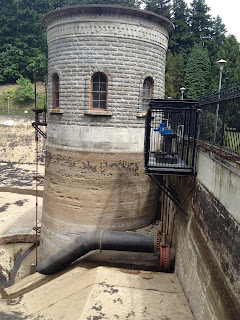 Here's a pic attempting to get the entire space. Doesn't that look like something you want to drink out of? 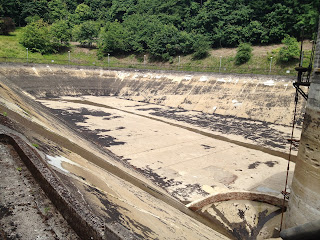 Drinking water aside, the park is a lot of fun and good exercise for people and their canines. And while the park is a fairly steep hill, the trails have been created so people can casually wind their way in circles to the top.

Or, if you are like us, you can simply take the stairs straight up. 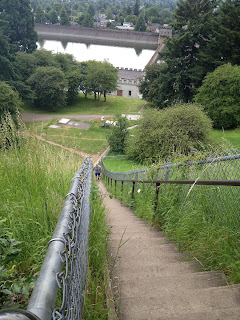 The view from the top of the park probably isn't as good as it was 30-40 years ago because the evergreens continue to grow (not that I want to stand in their way). Still, on a nice day, a Shiba can see for miles. So can her humans. 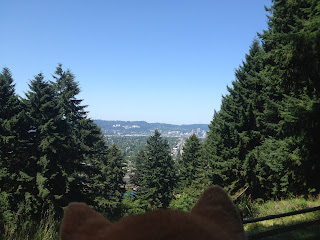 It's a great place for a some exercise and we've been back a couple times since our initial visit.

On nice days get there early. The parking lot fills up by noon.

Bring sunscreen on nice days because while there are plenty of trees all of the trails near the reservoirs are in open spaces.

Dogs on leash only. As it should be.

There are plenty of restaurants in the area to grab a bite. At the northeast corner of the park is Misaki's favorite, Steve's Cheese. At the east side is all the restaurants on Hawthorne. To the west side is The Country Cat for all meals, Bi-Partisan Cafe for coffee, pie and snacks, and Tanuki for dinner.
Posted by Jason at 12/16/2012 10:00:00 AM No comments: