When we first adopted Misaki - as an almost seven-year-old retired show dog - we were surprised to find out she didn't know basic commands like sit, stay, down, etc. Apparently this is not what show dogs learn; instead they learn a different kind of commands and something called "stacking."

No big deal, we could just teach the commands to her, right? We taught our Akita all the basics with little trouble, which is easy to do when you have a very food-motivated dog. Ruby was. Misaki is.

But teaching Misaki didn't go so well. She looked at us like were crazy, so we gave up. Besides, she was still a very well-mannered dog, she walked well on leash, she doesn't jump on people (usually) - so what if she doesn't sit on command, right? We aren't sticklers, as perhaps we should be as pack leaders.

Who are we kidding - Misaki runs this pack. She's got us squarely under her paw.

A couple weeks ago we decided to try again, just to see. We used Zuke's treats, giving her the command to sit with a finger snap, tapping her at the base of her tail to encourage her to sit down. And she responded - quickly. In fact, with just a few five-minute sessions Misaki is now sitting on command. 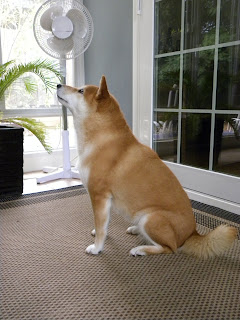 Of course, there are some caveats, as there always is with our cute little Shiba. One, she won't do it for you unless she knows you are holding a treat she can have. Otherwise why bother, right? Also, she will only sit on the carpet, not on the tile in the bathroom or the hardwood floor in the kitchen.

Look at that posture though - a perfect sit! Not the well-known sideways Shiba sit. Sometimes she does want to "stack" though, mostly when she doesn't want to be forced to sit. She'll extend her back legs rigid and somehow make herself unnaturally heavy - she can't be moved. I have no idea how she does this.

But hey, good puppies get treats... 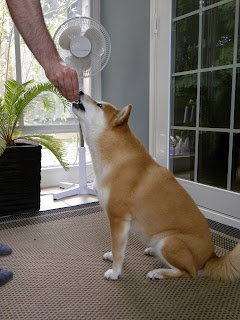 She is normally grateful for the treat. And, she will sit and wait as long as it takes to get the treat. 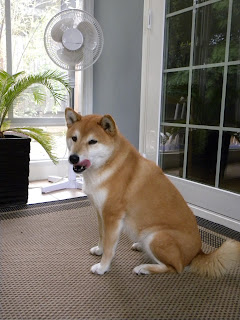 And if she isn't getting a treat - maybe just some skritches instead - she wants to know why. 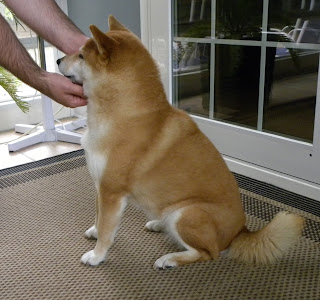 There has been an unexpected result of this training. Because her training sessions have been at the same time every day, she now knows exactly what is going on. Why is that important? She doesn't wait for the command. Instead, she just sits right in front of us and expects her treat for being such a good girl.

I'm torn. This is obviously a polite move by the dog, and we like the fact she will sit. However, I have this feeling I've lost control of the situation a bit. After all, if I give her a treat when she sits - rather than me asking her to sit, her sitting, and then giving her a treat - who is training who? She now is the master, I'm only doing what she expects.

Sly, sly move, Miss Misaki. But do I regain the upper hand by knowing what she's doing? She'll probably let me think that.

I have visions in my head of her randomly sitting in front of house guests and waiting for them to do their duty and give her a treat. I can totally see her doing this - maybe even at the beach too. She already looks up at any person who walks by, stopping almost in their path and expecting to get loved up. Sitting and waiting for a treat is the obvious next step.

Have to keep an eye on that girl.

I Killed a Red Pen

My first ever round of revisions went pretty well, I think. I mean, I have nothing to compare them to.

I printed each chapter as I wrote it over the previous two months, three-hole punching them and putting them in a binder. When I was finished, after letting it sit for two weeks, I broke out the red pen and started reading the pages. It took me about two weeks to cover my 260 pages and 37 chapters with red ink.

It wasn't a brand new pen when I started, but I don't normally use it very often so there was plenty of ink. Now all of that ink is soaking the pages of my manuscript.

Some people get really freaked out by red ink, as if it gives them flashbacks to elementary school, but it doesn't bother me. It's just another step on the road from Point A to Point B, and a take an odd kind of glee in marking up pages. I take more glee when they are someone else's, but still, it's fun. The whole point is to make the end product better, so it's hard to be mad at that.

I learned a couple things reading through the manuscript:

1 - There were scenes where I knew as I wrote them I would need to come back and spend serious time on them during the revision stage. These scenes were not nearly as bad as I remembered.

2 - There were scenes where as I wrote them I knew I had nailed them, that the revisions here would be minimal. These scenes are not nearly as good as I remember.

Then there were the scenes where I didn't have a good sense of where they would end up. Those scenes ended up being really good or really horrible.

In the end, no scene escaped with only a minimum of red ink. In fact, I could probably count on two fingers the number of pages without red on them - and those two pages probably were at the end of a chapter with only a few lines on it.

To me, I take this all as good news. I think at the first draft stage if I don't find problems or things to improve in every scene I'm not looking hard enough.

What's the next step? This weekend I will start the integration of these edits into a second draft. I'm hoping this only takes a couple weeks, but who knows? I signed up for a six-week online class about revisions starting on July 17th, so I want to be finished at least a week before that so I can let it sit. (In my confirmation email for the class it was suggested I should come to class with a manuscript I hadn't looked at in six weeks. Oh well.)

That class is going to produce the edits leading to the third draft, and after that, maybe, I'll see if anyone wants to read the thing. Maybe.

It's all progress - and it feels good to reach another milestone.

Email ThisBlogThis!Share to TwitterShare to FacebookShare to Pinterest
Labels: writing

Last week Wifey and I decided to take advantage of this pretty cool thing Portland does called Dining Month Portland. Participating restaurants offer up special menus - appetizer, entree, and dessert - for $25. Usually this is a good deal, but it depends on the restaurant, of course.

The idea of Dining Month Portland is to encourage out of town visitors to check out the restaurants, but - and this is just a guess on my part - I think locals partake in it just as much or even more.

Paley's Place, in Northwest Portland, is one of the top restaurants in the city, with owner Vitaly Paley recently appearing on Iron Chef America (and winning the radish challenge) and also authoring a book. Paley's prides itself on sustainable, local food done with a French twist (Paley's background).

The restaurant also does half and full portions of many of its entrees, something we love because it means we get to taste more things without getting stuffed.

With the Dining Month special it worked out the dessert was free based on the menu list prices. The offered a salad, a dessert, and an entrees. We ordered another entree and another dessert and shared everything.

We were started off with some fresh bread from Ken's Artisan Bakery, which is just down the street.

Then came the salad. 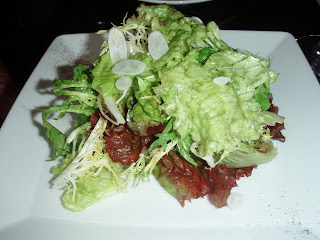 George's Gathered Greens - with lemon and extra virgin olive oil
This may be the best salad I've ever eaten. The lemon aided a whole new dimension for me. See those white things on top? Radishes. He's good with them.

The first entree, the one as part of the Dining Month menu, was a half-order of grilled pork shoulder. 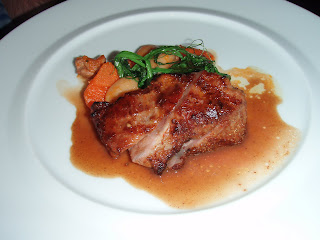 Grilled pork shoulder with fava beans, raab, and apple cider pork jus
Again, this was excellent. The vegetables on the side were just as tasty as the pork, and apple cider jus provided the right amount of sweetness.

Our other entree was a half order of grilled salmon. Our waiter - who was very, very helpful and courteous - told us it came from the Quinalt Indian Nation in northern Washington (yes Twilight fans, the same Quinalt, but no, I don't think our fish was caught by a shapeshifter/werewolf), on the Olympic peninsula. Apparently rules state 90% of the fish caught there must stay with the nation and Paley's has a deal for a decent chunk of the final 10%. Our fish was caught by a fisherman named Sonny, so - thanks Sonny! 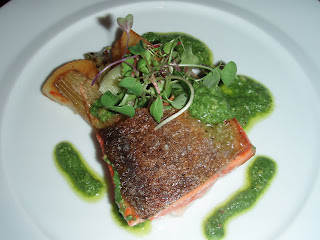 Quinalt River grilled salmon with pesto, braised leeks, roasted potatoes and turnips, and greens.
The skin on this fish was amazing - crunchy and salty. Wifey doesn't like fish skin so I ate the whole thing. And it was heaven.

Here's another view. The fish was cooked medium rare, but the flavors were excellent. I've never put pest on salmon - might have to try that at home. 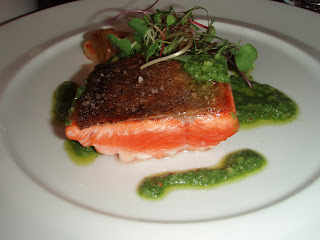 Then it was time for dessert. Paley's pastry chef is Kristen Murray, also widely regarded as one of the best in the city. Since we love our desserts, we were excited to try her treats. This toasted coconut cake came with the Dining Month menu. 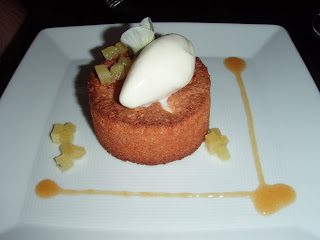 Wifey ordered the chocolate souffle cake after agonizing between that and the creme brulee. 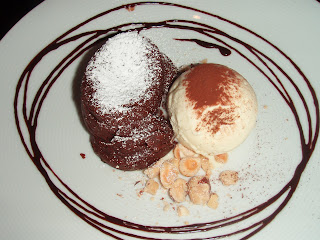 Chocolate souffle cake with toasted hazelnuts and honey-vanilla ice cream
Everything on this plate complemented everything else, even the hazelnuts - and neither of us are super excited about nutty things.
My only gripe is I was still a tad hungry at the end, which just meant we should have chosen the full order of salmon. Duly noted for next time - and there will be a next time. Paley's Place is one of those Portland restaurants that can't be missed. (And we might have to try another restaurant or two before Dining Month is over.)
Posted by Jason at 6/20/2011 09:08:00 PM No comments: