For the past few weeks I've been making picks based on the theory the Pac-10 cannot be predicted. So far that's gone okay. I went 5-0 last week for my first perfect week in a while, putting me 43-12 on the season.

But we learned some things too. We learned California is a pretender and with their senior quarterback Kevin Riley out for the rest of the season after hurting his knee against Oregon State they didn't have anything left. Considering they weren't great in the first place, they may be lucky if they make it to a bowl game this year.

Washington is another school where the writing may be on the wall. Can anyone tell me how that team who was absolutely destroyed by Stanford managed to beat USC and Oregon State? This week they are without their quarterback Jake Locker as they visit Autzen Stadium; with Locker they have a shot anywhere, but without him they will be severely exposed.

Meanwhile Oregon State seems to be getting better every week, even on the defensive end, as they do every year. Arizona has also shown they don't miss much with quarterback Nick Foles nursing his own injury.

And SC? Well, they are still a dangerous team, but they just don't have the IT factor anymore. Maybe next year it will be back, but this year they are clearly vulnerable.

Oregon keeps taking the best everyone has to offer and spitting all comers out. Against better teams - like Stanford and SC - they stayed relatively even for a half before the speed of their game play just ran the other team out of gas. Stanford is still a clear number two, but the next group has split up a bit. It will be a surprise to me if anyone in Tier 4 makes a bowl game. Maybe the Sun Devils...maybe, but they need seven wins to be bowl-eligble because two of their four game from FCS schools (like the one #2-ranked Auburn is playing this week).

On to this week's schedule. As always, all game times are Pacific time, followed by the network and the pick. Also, the network and whether or not it's on TV is for Portland - some games may be televised regionally, so if you live in a home market, check your local listings. Rankings are in parentheses (AP, USA Today). The BCS rankings will be ignored for now (and no, not because of what they have done to Oregon).

* USC is not eligible for the USA Today Coaches Poll because of NCAA sanctions.

The Oregon pick is a no-brainer - that game is really how much will the Ducks win by. And yes, I did pick Wazzu, you are reading that right. I just don't think the Bears have what it takes for whatever reason, and the Cougars can be scrappy. This may be the Cougs' only chance at a Pac-10 win until they play the Huskies.

The Bruins simply aren't that great and the Beavers seem to get better every week. OSU is a little banged up, but it shouldn't matter. SC is going to have some frustration they vent on the Sun Devils.

As for the game of the week, Zona-Stanford, remember how previously I talked about how teams have to get lucky sometimes? The Wildcats are not lucky this season. They get Stanford and Oregon on the road after a loss at home to Oregon State, and they have the injury to Foles. The cards are just not dealt their way this year.

As mentioned above, Auburn is playing a FCS team this week in Chattanooga, so a win is practically assured.

Boise State will play another team who is undefeated in the WAC in Hawaii, but at home they should run the Warriors out of the stadium.

The game of the week - maybe even better than the Zona-Stanford tilt - will take place in Utah where the fifth-in-the-BCS Utes will host the third-in-the-BCS TCU Horned Frogs. It's the last regular season game of 2010 that will feature two undefeated teams. The winner will have a shot at a BCS game, the loser will not, simple as that.

This game is at 12:30pm on CBS College Sports (meaning most people don't get it, and to me that means it's not in HD - lame) and I guarantee I'll be clicking over to it just as soon as Oregon goes up on Washington by three touchdowns. Maybe earlier.

Misaki is not impressed with the idea of a Bruin, so of course she is picking the Beavers. 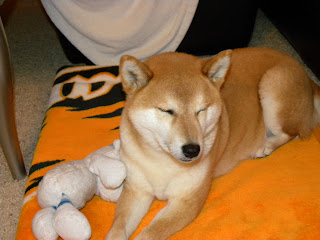 Misaki: SQUINT!
Squinting is what her and the cats do when they are overly exasperated with human lameness. This was her response when asked if the Bruins have a chance.
Posted by Jason at 11/05/2010 07:00:00 AM