About 16 months ago, right about the time I started this blog, one of my first posts was about Deschutes' Brewery's Black Butte Porter XXI - the special birthday edition of the very popular Black Butte Porter.

I noted in that post these bottles came with a Best After date, something I hadn't seen before. Well, I've had four of these bottles - yep, $12 each - squirreled away, waiting for that best after date to become today. Well, it was actually last week - October 17, 2010.

I was of two minds about this whole saving the beer thing. On one hand I really, really enjoyed the beer as it was, fresh off the shelf. On the other I was promised it would get better and more flavorful with time. Despite wanting to crack one of these in the months between last July and this October, I did manage to wait.

Then I had another thought: what if it's not as good as I remember? This was one of the very first specialty beers I tried and since then I've had, well, a few others. Some I liked, some I didn't. With a palate that has now been exposed to a wider range of specialty beers still think this was the greatest thing ever? I wasn't sure, and that made me a little nervous, because I had managed to wait all this time (and they were spendy).

This time that wax seal had no chance - I'm an old pro by now. I dipped the pointed end of the bottle opener in the wax just below the bottle cap line, scraped away just enough to flip the opener around to get a grip, and pop - it comes off easy.

The nose on this was what I expected, with lots of chocolate and coffee, plus a little maltiness. The color, if possible, might even be a littler darker and richer than it was 16 months ago. And this time, I have pictures! 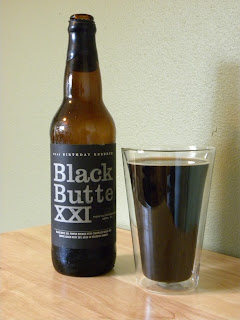 The flavor was good, but also very chocolate-centric. The coffee flavor is still there, but the chocolate is what really seemed to develop since the first bottle. What also came out is the whiskey flavor - these had originally been aged in Stranahan's Colorado whiskey barrels. And yes, that means the alcohol has really developed as well. I don't recall it being like this last year, but one full bottle of this was more than enough for me - a nice little buzz if you are into that sort of thing.

So was it worth the wait? Were my fears about an expanded palate justified? Well, yes and no. It didn't seem as smooth as I remember, but I think that's more due to the way the chocolate flavor seemed to develop over the past 16 months at a faster rate than the others. It also gave the beer an unexpected sweetness, and coupled with the liquid's thickness made it a tad syrupy.

I still enjoyed it, but, sadly, it's probably not the greatest thing ever anymore - just really, really good.

Should I have not waited? Perhaps, but it really doesn't matter because I chose to wait. And besides, I still have these three bottles of wonderfulness for a rainy winter day. Well, three rainy winter days - in Portland I'll have plenty to choose from. 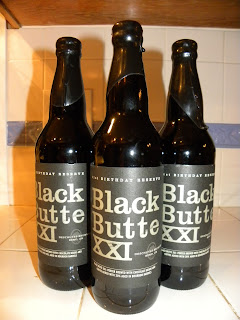 Email ThisBlogThis!Share to TwitterShare to FacebookShare to Pinterest
Labels: beer