Few restaurants have seen as much hype over the past year than Ox, an Argentine-inspired mecca of meat on Martin Luther King Boulevard in Northeast Portland. The kitchen - and the restaurant itself - are run by a husband and wife team, Greg Denton and Gabrielle Quinonez. Formerly in charge of the kitchen at Metrovino (where we had a nice brunch last summer), this is the restaurant they have dreamed of creating. 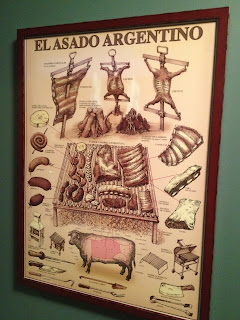 The space is about average size and fills up quickly. We arrived not long after they opened and were able to walk right in, but be prepared to wait if you arrive after 5:30pm. It's impossible to miss the focal point of the open, elevated kitchen: the wood fired grill/roaster/spit/meat cooking machine of awesomeness. The design of the space makes sure you don't miss it, but it also doesn't dominate. 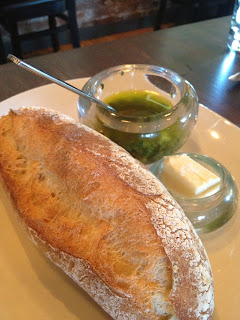 Service starts with bread, butter and chimichurri. This was the first time I've ever had chimichurri and now I have no idea why. Delicious. 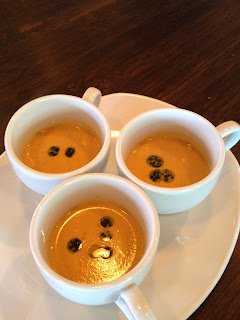 Next came a small taste of soup, with drops of olive oil. (I'd tell you what kind, but truthfully it's been six months and I'm just now catching up on the blog.) 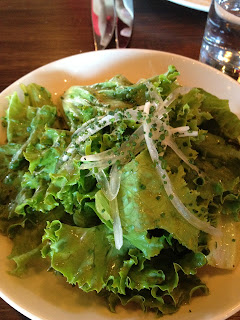 Our first item was a small salad. Very crisp and clean, it was a nice balance to the rest of the dishes we ordered. 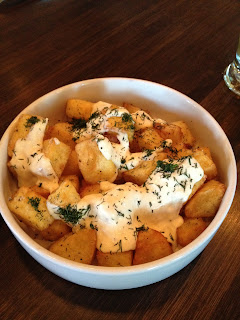 Fried potatoes, aioli and dill. Very much like potatoes bravas (if not the same, just with a different name), these were crispy on the outside and soft and smooth on the inside. 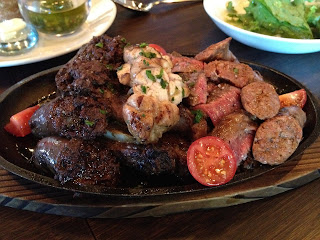 The star of the meal was the Asado Argentino. On the menu this meat plate - consisting of grilled short rib, housemade chorizo, morcilla (blood) sausage, grilled skirt steak and sweetbreads - says it is for two, but there were three of us and we took half of it home for later. The salad and potatoes come with it and the bread and soup were complementary, so while $60 seems like a lot for one dish, it was a pretty good deal.

I grew up in a typical American household where we didn't eat more than your typical beef cuts. I've learned along the way on this food journey Wifey and I have undertaken that I've missed out on a lot. I was a bit wary of the morcilla and sweetbreads, but while everything on that plate was excellent those ended up being my two favorites.

So many other dishes on the menu looked good and maybe on another visit we'll try them out, but this was well worth the visit. 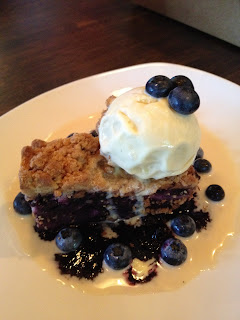 For dessert - we were stuffed beyond belief but had to try this out - we ordered a blueberry buckle with ice cream. Again, very, very good.

Verdict? Go. Enjoy. Ox gets a lot of hype and it's all deserved. Service was excellent, food was magnificent - what more can you ask for?

Dog-friendly? There are a couple outdoor tables, but not sure if dogs would be allowed. The only access point may have been through the dining room.