If there is one thing our little Shiba loves it's a good hike. Last summer we took her up to the slopes of Mt. Hood to a place called Ramona Falls for a hike that was not only exhausting but beautiful.

Misaki always gets a little excited when we put her chestplate harness on her - and it's not because of the harness. She actually hates the harness, but she knows it means we are heading out to a real hike and not just a quick jaunt around the neighborhood.

This jaunt started early on a Saturday and it turned out to be not that great of a day. The clouds were low and it was a bit chilly, but we figured a 7-mile hike with a 1,000-foot elevation change would take care of a little chill.

Parking at the trailhead is a long ways off the beaten path. The exact route is detailed here, but basically you take Highway 26 to Zigzag, take a few turns, drive down some worn and poorly maintained roads, and you end up here: 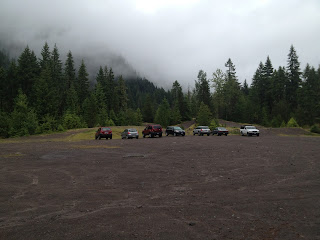 We got there pretty early (which means by 10am or so, since it's quite a drive from west Portland) and weren't sure we were in the right place. All of the references we looked at talked about how popular the spot was and how to find extra parking spots if the area was full. As you can see, we didn't have any problems. Maybe it was the weather, but honestly this doesn't seem like a place to decide to go on a whim. You have to plan for this hike to a certain extent, so while weather could be a factor I find it hard to believe people wake up on a nice day and just decide to head out here on a whim. This meant the trail wouldn't be busy though, so we liked that. 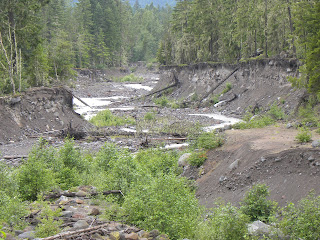 The trail follows the Sandy River for a while on a moderate slope. The landscape is pretty in the way nature's power can be pretty; this entire area was overrun with flooding just a couple years ago, washing out homes and roads, and the evidence of that destruction is everywhere. 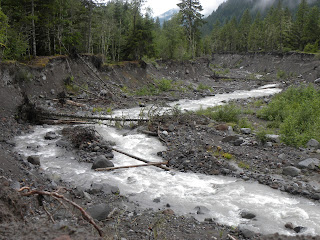 After while you get to a bridge across the small but powerful river. There is no handrail and the "bridge" is narrow, only a few feet over the rushing water. Misaki surprised us both by jumping right up and walking across like it was no big deal. Honestly, I thought I might have to carry her. That's our pup - always keeping us on our toes. 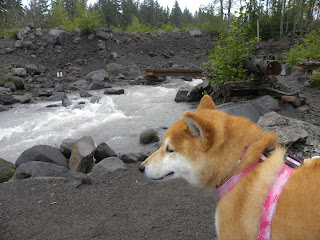 The trail twists and turns through the forest and moss-covered rocks and dead trees cover the landscape. It's pretty, with every shade of green you can possibly imagine. 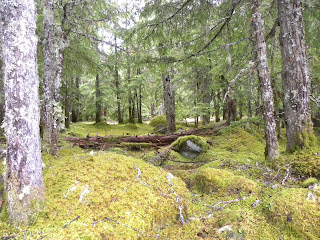 Then the uphill rise begins and it seems like it's never going to end. The rise isn't at any time too steep, it's just  constant. At times the river side of the narrow trail is basically far drop to the water and I was keeping a close watch on Misaki, although if anyone was going to slip it was probably me and not the dog.

She likes to freak us out, too. After Wifey and I spent some time talking about how easily you could just disappear out here - and my writer mind started down the path of a horror story - Misaki stopped at one point, staring into the woods. She even barked once, like there was something out there. Wifey and I looked as best as our weak human eyes could manage, but we have no idea what she saw. Bear? Cougar? No idea.

After the major climbs in the trail it switches back a few times through the woods, away from the river. The sound of rushing water teases you, getting louder and louder as you continue. Then, seemingly without warning, you step around a corner and you see this. (Please, click again on the picture. It's impossible to do this justice, but make it as big as you can.) 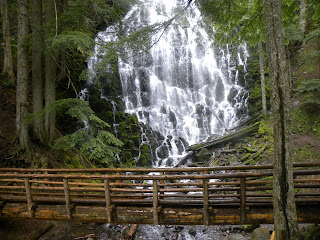 There she is, Ramona Falls in all her glory. You really have to spend some time here in order to get a true feeling for how magnificent this waterfall is, to see it from all the angles. And check out this bridge crossing the creek flowing from the waterfall. 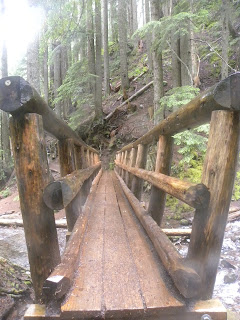 Given how far from car access you are it's obvious it's built from the area's trees by necessity. It's very, very sturdy. I'd hate to have had to carry the chainsaw all the way in to build this with.

We had our lunch here, which consists of standing around and holding your food because, well, you are in the middle of the forest and there is no seating. It's also really loud, so it's not really the place to linger for a conversation or hang out with a book, so it's time to get back on the trail. You have two choices. You can either turn around and go back the way you came, or continue on down the path, which will eventually go far, far away or loop back to the trail you came in on near where you crossed the river (your choice). 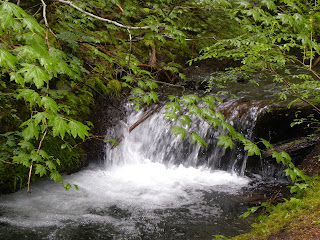 We elected to try out the loop. This follows Ramona Creek all the way to the Sandy River. At points it runs along a gigantic rock wall that seems to just appear out of nowhere and is riddled with thin waterfalls. We crossed back and forth across the creek a few times, once on this magnificent bridge. This one seemed to be brand new. 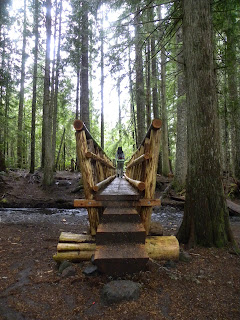 To the right of it was an old one, battered and broken from many winters and floods. 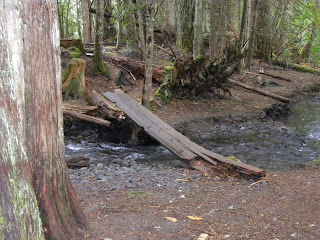 We followed this trail for awhile and eventually reached the Sandy River, but not where we could actually cross it. Apparently we missed a turn. However, at this exact point were a few people crossing the river on a fallen tree. That didn't look safe at all but they didn't seem to be in any trouble. We turned back and apparently those people made it just fine, because we never saw anything on the news about missing hikers on Mt. Hood. At least not that week.

After we turned around we walked a short distance and ran into this written in the dirt and pine needles on the ground. 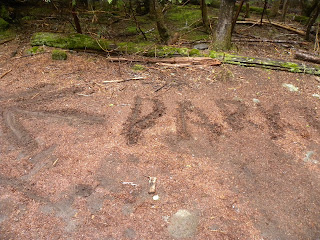 How handy! Apparently we weren't the only ones who missed a turn.

On the way back, after we crossed the same bridge over the Sandy River, we came upon some moss-covered boulders the size of a car. I picked up our cute little pup and put her up on top of the boulder, about six feet off the ground. I wasn't sure what she would do, but she seemed pretty pleased with her perch above her human servants. She calmly sat down on the rock, looking down at us as it to say, "Finally you know your place." We had to take some pictures and this one might be my favorite of her ever. 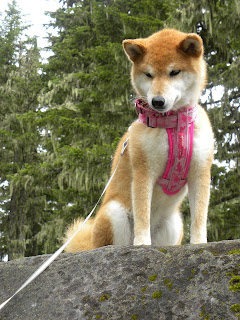 Misaki continues to amaze me. By the time we got back to the parking lot Wifey and I were dragging. That hike was exhausting, testing not only muscles but stamina. Despite packing plenty of food and water we just wanted to collapse on a couch. But Misaki? Not her. I swear she got stronger and stronger, picking up the pace the more miles we put behind us. We usually let her set the pace anyway, since it's faster than what we might set on our own (we joke that she's our trainer, pushing us more than we would push ourselves, and give her credit for keeping us in line), but we almost never see her out of breath.

After over seven miles of hiking, 1,000 feet up and down, she was in the parking lot with a great big grin on her face, wondering where we were going next. I should also point out that she's nine years old, which is something around 60 in dog years. I hope like hell when I'm 60 I'm in at least half as good of shape as Misaki is now.

Portlanders, get out of the city and check out this waterfall because it's not to be missed. Bring your dog, too, but as always, Misaki prefers it if your dog is on leash as she always is.
Posted by Jason at 4/22/2013 01:00:00 PM