She's Trying to Scare Me

Misaki has apparently decided it's funny to freak us the hell out.

She used to go outside after dinner to do her business without much regard for what's going on around her, taking her time to sniff as needed. Just a few weeks ago this all changed.

We don't know why or what sparked it, but Misaki has suddenly become very much on her guard when she goes outside, especially after dark. Instead of just running off the deck into the grass and bark dust, she now stops on the concrete walkway to take in the look and feel of the entire yard, like she's waiting for something.

There have been no other animals in our yard or encounters by Misaki we are aware of. Still, her actions seem to indicate she is super positive there is something to guard against.

First she looks off to the left. 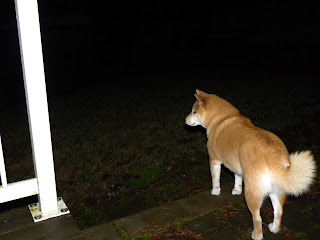 Then she looks off to the right. 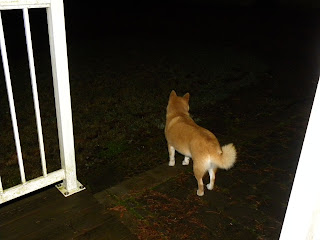 Then she prances off around the solarium, nose to the ground all the way. 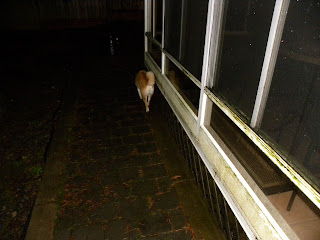 Sometimes she will stop and sniff below the windows, at the latticework. This lattice covers all possible open areas at the base of the solarium and all around the deck, but she still sniffs and will occasionally stop and stare like there is something under there.

Then, after the solarium she does a walk around the yard (apology for the pictures, but they actually turned out pretty well for taking them with just a basic flash into darkness). 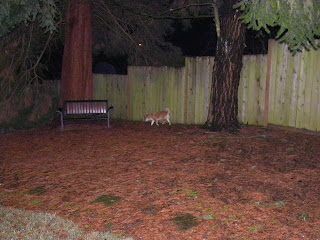 The outer part of the yard doesn't interest her nearly as much, though she still seems very focused. 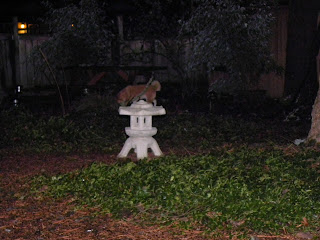 Eventually she will return to the deck, again looking outward into the yard or staring into the lattice. She doesn't seem scared; instead, she seems more curious, or like she thinks there is something there we need to be aware of.

Sorry pups, but we haven't seen anything.

Then she started doing this in the house, staring at the heating and cooling vents. In particular the vent in the living room at the base of the cat castle is her favorite. Misaki sits a few feet back, absolutely focused - so focused, you freak her out when you touch her because she isn't paying attention to you. 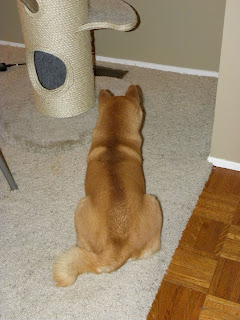 Then she'll get up and move closer. 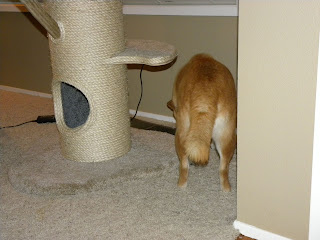 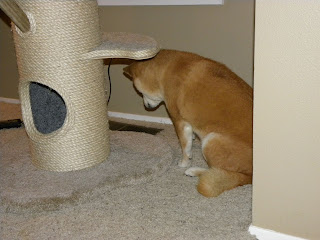 And finally, she will be practically face down in the vent. For hours. 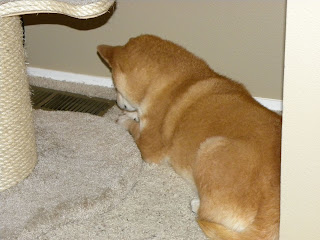 We have no idea what she thinks she sees or hears in there. We can't see anything, and the furnace is new and doesn't seem be doing anything different than it did before. The cats don't seem to have any interest in what Misaki is tracking.

At first I thought there were bugs or something, maybe a mouse, but nothing has come up out of there. It's not the warm air she's after, because she sits there whether the air is coming or not.

She also started occasionally sitting at the other vent in the living room and the one in the master bedroom. The ones in the downstairs bathrooms she has no interest in, and she doesn't seem curious by the upstairs ones (which are in the ceiling, but still...). It's mainly this one vent, and it doesn't seem to have any relationship to the fact the cats sleep in the castle. She's there whether they are or not.

So what are you after, Pups? Is there really something in there? Should we be worried? Is it growing, like some weird alien monster? Are you the first and only line of defense?

Or is it something sneakier? Are you just trying to drive us crazy?! Wait...I think I'm on to you...