There are some places in this fair city of ours we have never been, places that when people talk about them and we say we haven't been there our statements are met with shock, as if we have somehow upset the speaker's delicate balance in their understanding of us as people.

"But you love food!" they say. "How could you have not been there yet?!"

Um, I don't know. Because there are tons of yummy places to go, with more popping up all the time, that it's almost impossible to keep track? And that it's hard enough for us to make it back to the places we know we like, let alone to try new ones on a consistent basis (and keep our foodie cred)?

Besaw's, located in northwest Portland at 23rd and Savier, is one of those restaurants. Open since 1903 (as they proudly note on the sandwichboard below and on their website), Besaw's is somewhat of a Portland institution, something along the lines of the Portland City Grill or Jake's Famous Crawfish. 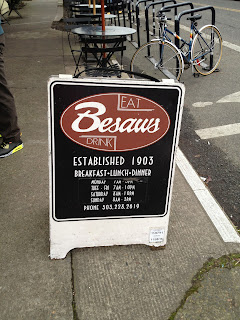 It's busy pretty much all the time and on weekend mornings the lines can stretch alongside the length of the restaurant and take hours to get a seat. We hadn't been there before mostly because of the line; this is a place you have to really plan to visit if, like us, you hate waiting for something you don't know will be worth the time. In fact, we tried to eat here once before but the line was already too long, so we went somewhere else. 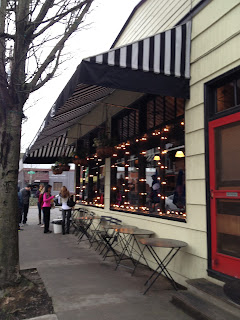 A few weeks back we made a point of getting here early on a Saturday morning and were seated right away. Besaw's began as a bar and the bar is still a very prominent feature, though the atmosphere is assuredly family friendly. Families, couples and friends form small groups of varying sizes, with tables stuffed into whatever alcove the restaurant can manages.

Because of a craving we started off with a cinnamon roll, a 'how-convenient' special of the day. As you can see in the picture, it was pretty good sized. 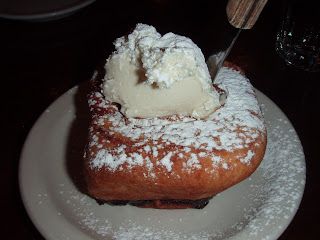 However, it really wasn't very good. The dough was nicely baked, but the layers of the roll were too thick and didn't have enough cinnamon filling. It was as if the dough needed to be rolled flatter and layered with more cinnamon/sugar mixture. As a result the cinnamon flavor was almost nonexistent. The frosting had very little flavor. We ended up getting one at Fleur de Lis later in the day because this just didn't cut it and the craving still lingered.

Now the main dishes. Wifey ordered the breakfast burger - here is the description from the menu:

Which translates into this on the plate: 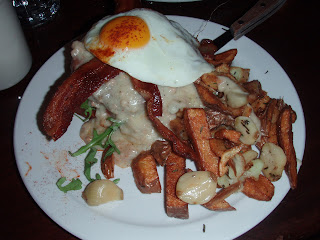 Now when someone says "rosemary-garlic potatoes" to me, French fries with whole cloves of garlic is not what comes to mind. Check out these monsters: 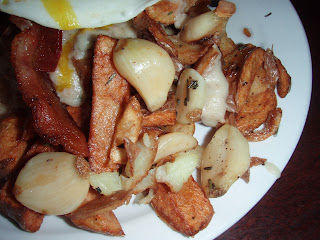 And there was a ton! I love garlic, but damn, that was  A LOT of garlic. And maybe it's just us, but we thought they were a tad underroasted. The burger was served on one piece of toast - it had no top. Maybe this is just our assumption, but unless otherwise stated we expected a top. The gravy was severely lacking in flavor on its own, but altogether this wasn't a bad dish. Nor was it special.

I ordered the farmer's hash:

It was...fine. Nothing special. This also had a ton of garlic and lots of cheese (so much the menu lists it twice!). 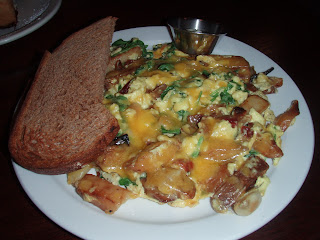 Nothing in this meal stood out; in fact, some of it was borderline no good. Many, many people seem to have a special place in their heart for Besaw's and I think that's because it has been around for so long. Quite a few Portlanders grew up with this place and made special memories there long before the city's food revolution, so it's placed in a higher echelon of restaurant than the food it produces. We won't be back.

Dog-friendly? There are a few outdoor tables along 23rd Avenue and I believe we have seen dogs there with their owners during the summer. We didn't ask specifically.
Posted by Jason at 2/07/2013 09:00:00 AM