Should I Correct Someone Else's Kid?

Let me start with this: there is no dog I would trust more, ever, with an unknown child than Misaki. In fact, I'm willing to bet she's a better and more trustworthy babysitter and caregiver than most day cares, but that's another topic for another day.

We are lucky with her. We know that. She loves people and will go out of her way to meet them. She isn't pushy, unless you count the nosing of legs, but she'll go over to people and stand expectantly at their feet, tail wagging (happy, effusive tail wagging, not the wary, anxious kind - we know the difference) and looking up with those chocolate brown eyes, until the person acknowledges her, preferably with skritches. It doesn't matter what age, gender, race - she's excited to meet people. (We joke she'd do whatever she could to help out someone robbing our house if it meant getting loved up.)

A lot of dogs aren't like this. We know this too, because of our experiences with Ruby the Akita. In fact, way back when in the early days of this blog I posted a plea to other dog owners about keeping their dogs on leash specifically because of what we dealt with her. If there is a spectrum of how well a dog gets along with strangers, Misaki is on one end and Ruby almost the polar opposite. She thought she was excited to meet people, but then would get so freaked out she'd pee on the floor. She would jump and bark at the slightest sound (Akita barks = earthquakes). A ringing of the doorbell on TV would put her on edge for hours. We deliberately kept her away from people - and absolutely other dogs - because after trying to get her over her fears it just wasn't happening. Instead, we gave in and decided to keep her within her comfort zone, for better or worse.

With Ruby we always told the neighborhood kids they could not pet her. Most of them were scared of the 90-pound Akita, ripped with muscles and a mouth full of sharp teeth. With Misaki? We don't worry in the slightest. Provided the kids ask politely we let them, because how could you resist this? 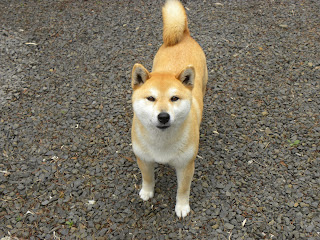 You can't. No one could. She puts up with a lot too. Most kids don't know how to properly approach a dog, which is somewhat darkly comical considering most of them freak out over a spider while the dog could rip their face off with one bite. She wouldn't, but she could. She lets them roughly pet her, give her kisses, put their face right up to hers, and her tail will wag wildly the entire time. The worst she might do is sniff their face and huff at them, possibly blowing a little spit on their cheeks.

We trust Misaki, but we know her. These kids? They shouldn't be so trusting. Chances are if they approach her like this that's how they approach any dog. If they had tried that with Ruby they might be dead. Heck, other Shibas wouldn't necessarily respond as pleasantly as her. I can probably count on one hand using three fingers the number of kids who have approached Misaki - a dog they do not know - in the right manner. (This is where I link to this fantastic Huffington Post piece by Sophia Lin regarding the proper way to approach a dog and how to recognize anxiety and fear reactions - hat tip to The Misanthropic Shiba for posting on Facebook. This should be required reading for everyone: parents, children, adults, old people, whomever.)

Every time another kid puts a hand on either side of her face and gives her nose bumps, which she enjoys, I think I should say something. I feel I should say they shouldn't do that, it's not the right way to approach a strange dog. I feel like I should show them the proper way.

But I don't. It's not my kid. I don't have kids, don't plan on having kids. This is something their parents should be teaching them, right? (And no, the parents are never around - not on the sidewalk and not at the park. Yes, they SHOULD be, but they aren't, and the fact they should be is a completely different discussion. Unfortunately the parents aren't in this equation.) And also, most parents don't like strangers correcting their children, even if they are right. The last thing I want to deal with is have some kid go whining home to their parents about how this guy yelled at them for petting his dog, and then at some point that parent wants to have a discussion with me.

On the flip side, if that kid gets his face torn off by the next dog he tries to approach that way, will I feel guilty when I see the story on the news? Do I have an obligation to correct these kids? Should I start? Do I have to take the time to explain to them the right way to approach a strange dog, even though all Misaki wants to do is smell their face?

This is where I turn to you, Internet. I'm going to post this on Facebook, my Twitter account, and Misaki's tumblr blog, and I'm hoping the Shiba community - and the dog community as a whole - can give some insights on this topic. Has this happened to you? Do you say something? How do you do it? Do you feel a societal obligation that you should say something?