If there is one Japanese dish that is quite loved in our household - among many that we love - it's Japanese-style curry. And as it so happens, there is a place in the Goose Hollow section of downtown Portland, near Civic Stadium (yes, I am going to keep calling it that), called Kale' (pronounced Kah-lay).

According to Kale's website curry was introduce to Japan from English visitors coming from their lands in India, and the Japanese then added their own twist on it to make it uniquely Japanese. If you have eaten both Japanese and Indian curries, you know the difference in flavor are quite pronounced, but in presentation and consistency they are very, very similar.

One interesting thing - at least to me, the guy with a degree in Japanese - is that while the name of the restaurant is Kale', the Katakana characters (seen below under the "e") read as "ka-rei." Katakana is the written language used for foreign words adopted into the Japanese language, and for "curry" Japanese kept the "r" sounds. My point is I don't know why there is an "l" in the Kale's name. But that is something only intriguing to someone who knows Japanese and has an interest in linguistics; it has nothing to do with the food. 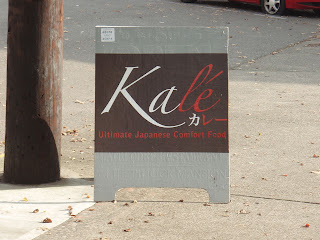 From the outside Kale' looks like it used to be a dentist's office or home. Inside the dining area is quite homey. There are plenty of tables, and for a weekday lunch it wasn't busy at all. In fact, I believe we were the first customers of the day and only one other person arrived before we left. In the picture below the front door is to the left and to order, you cross through the dining room and to the right is another room where you make your order, pay, and pick up your food when it's ready. You also bus your own table in that same area. 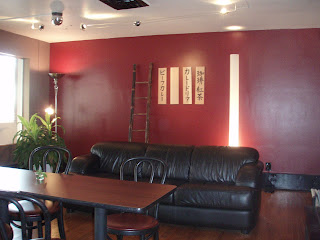 In addition to the finite menu - the three types of curry being beef, original (without beef), and doria (more on that in a bit) - Kale' also serves Caffe Vita coffee and has an espresso bar, of which we did not try out.

We decided on the beef curry and the curry doria. The doria is curry - beef or not, up to you - covering a generous amount of rice which is then topped with cheese and baked for ten minutes to give it a crusty cheese topping, almost like a lasagna. Kale' also offers your choice of cheese - cheddar or mozzarella - or you can have half of each as we did.

The owner, Makoto Yoshino, took our order. He's extremely friendly and is willing to explain any piece of the menu, which for a lot of people will be very helpful. Sadly, it really doesn't seem like Japanese curry is very common in restaurants (maybe I'm wrong, but I don't recall seeing it all the time, especially when compared with something like tonkatsu or gyoza, widely considered Japanese food staples).

He even said he'd bring the doria out to use, because it's very hot. So we made our order - both dishes were less than $15 - and went back out to the dining area to wait 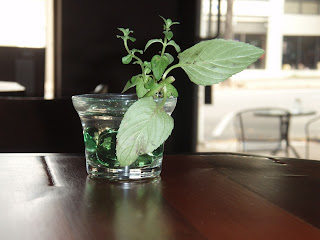 The beef curry came out first. It may not look like a lot of meat, but that's because it had been simmering in the curry so long it literally had become part of it, rather than something in it. The depth of the flavors is fantastic, to me better than any I've ever had. We make curry somewhat often at home, but we typically used a base for the roux that comes in a box from Uwajimaya. That curry also has more of a yellow color, but this one was a vivid reddish-brown, indicative of the seasoning and multiple layers. Curry can sometimes be a little salty too, but this had great balance. 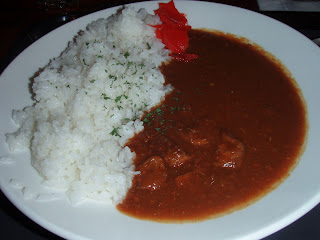 Then the doria came out. Neither of us really had any idea what to expect because the idea of cheese on our curry was quite a foreign one. I don't know if they do this in Japan - I know the one place we had curry in Osaka during our trip three years ago didn't - or if it's something to appeal to the American palate. Whatever the reason, we don't care, because it is damn good. Oh, and hot. Seriously. If you order this, be prepared to wait the 10 minutes for it to cook and then another 10-15 for it to cool so you don't burn your tongue. And don't touch the plate!

I will admit, it's not something spectacular to look at... 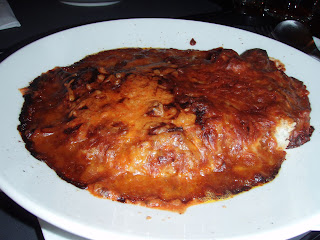 Our curry lunch at Kale' was one of the best we've had in a while. The flavors were fantastic, the service was great, and we will absolutely be going back.